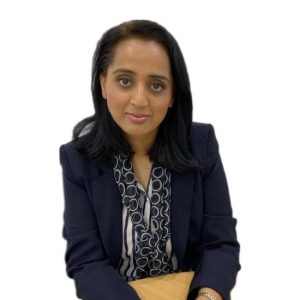 Shafana is a founding member of Prolegis Solicitors and Head of the Immigration & Asylum department. Since qualification Shafana was employed at a leading law college as well as working as an insolvency examiner for the Department of Trade and Industry. Throughout the above roles Shafana maintained her interest in education and lectured at Leeds Law College from 2006 -2008.

Prior to establishing Prolegis Solicitors, Shafana worked as a consultant solicitor in Harrogate where she developed and led the immigration department.

Shafana accepts a limited number of cases on a pro bono basis from vulnerable individuals, particularly women and victims of domestic violence in desperate need of legal assistance.

Over the years Shafana has developed a wealth of experience in dealing with a broad range of immigration issues and is an expert in her practice area. Shafana is well regarded for resolving highly complex immigration matters be it personal immigration [spouses, partner, family, dependant relative visas, applications under the Human Rights Act 1998] or business immigration [where an employer is seeking to recruit foreign workers, or challenging a civil penalty for employing illegal workers].

Shafana offers advice, assistance and representation at court in all areas of immigration law. She has successfully challenged deportation orders and obtained injunctions from the High Court to halt removal on numerous cases.

Shafana’s most notable cases include obtaining refugee status for a prominent scientist during the biological weapons era. The intelligence services including MI5 were involved, and the case attracted interest from some of the world’s most powerful nations including the USA.

Prolegis Solicitors is a trading name of Prolegis Limited registered in England with Companies House with number 09054713.

The word “Partner” refers to a Director of the Limited company or an employee or consultant who is a lawyer with equivalent standing and qualifications. A list of Directors is available for inspection at the registered office.

The firm is authorised and regulated by the Solicitors Regulation Authority. SRA number 618947.

This site uses cookies: Find out more.
Book a Meeting

However simple or complex your query, Prolegis are here to help. Enter your details below and your enquiry will be reviewed with no obligation. We will get in touch when it’s most convenient for you.